In modern life, we have to face many problems one of which is traffic congestion becoming more serious day after day. Traffic flow determination can play a principal role in gathering information about them. This data is used to establish censorious flow time periods such as the effect of a large vehicle, specific part on vehicular traffic flow, and to provide a factual record of traffic volume trends. This recorded information is also useful for processing better traffic in terms of the periodic time of traffic lights. There are many routes to count the number of vehicles passed at a particular time and can give judgment of traffic flow. Now a day’s camera-based systems are better choices for tracing vehicles data. This project focuses on a firmware-based novel technique for vehicle detection. This approach detects the vehicles in the source image and applies an existing identifier for each vehicle. Later it classifies each vehicle on its vehicle-type group and counts them all individually. The developed approach was implemented in a firmware platform which results in better accuracy, high reliability, and fewer errors. Traffic lights play a very significant role in traffic control and regulation on a daily basis. Using python the density of the roads is determined and the microcontroller changes the duration of green light given for each road as per the output after image processing

In this system, we are going to implement crowd-based traffic control? a light system using CNN, the lane will get open on the basis of the crowd at the desired lane. It is identified by capturing the vehicle crowd images in the lane and identifying the number of vehicles with red color in that desired lane. 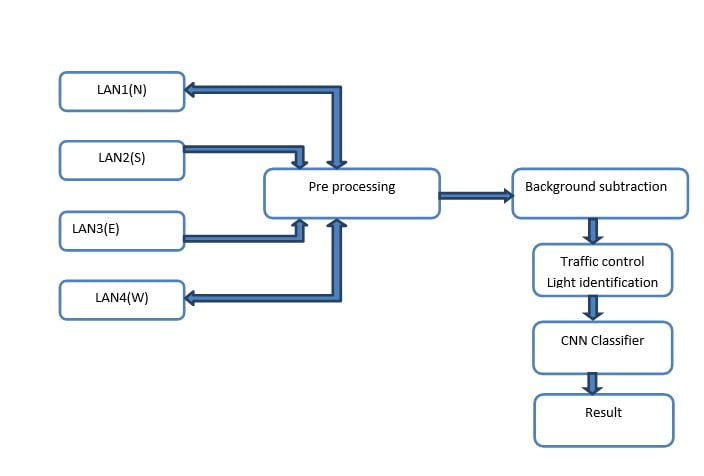 Image Pre-processing? is a common name for operations with?images?at the lowest level of abstraction. Its input and output are intensity? images. The aim of?pre-processing?is an improvement on the? image? or data that suppresses unwanted distortions or enhances some images? features important for further processing.

Image restoration is the operation of taking a corrupted/noisy image and estimating the clean original image. Corruption may come in many forms such as motion blur, noise, and camera misfocus.? Image restoration is different from image enhancement in that the latter is designed to emphasize features of the image that make the image more pleasing to the observer, but not necessarily to produce realistic data from a scientific point of view. Image enhancement techniques (like contrast stretching or de-blurring by a nearest-neighbor procedure) provided by “Imaging packages” use no a priori model of the process that created the image.? With images, enhancement noise can effectively be removed by sacrificing some resolution, but this is not acceptable in many applications. In a Fluorescence Microscope resolution in the z-direction is as bad as it is. More advanced image processing techniques must be applied to recover the object.? De-Convolution is an example of an image restoration method. It is capable of Increasing resolution, especially in the axial direction removing noise and increasing contrast.