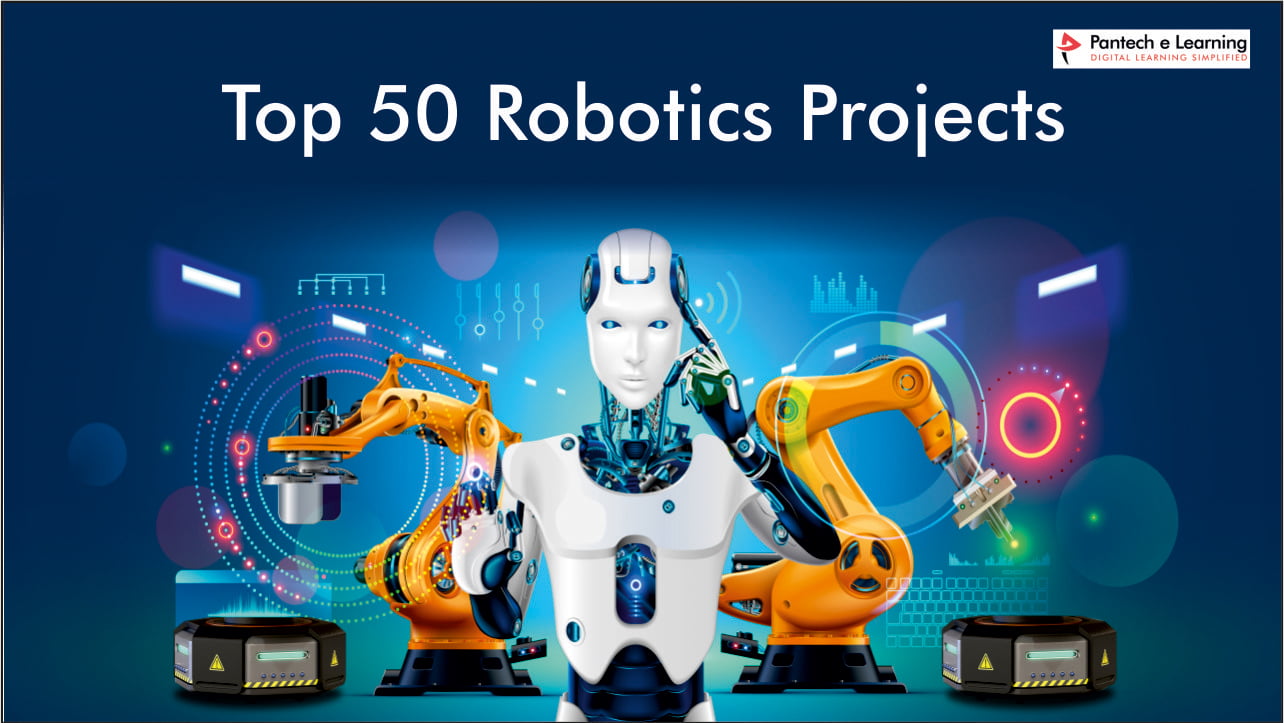 Robotics is the intersection of science, engineering and technology that produces machines called robots that substitute for human actions.Top 50 Robotics Projects  has a differing level of autonomy, ranging from human-control bots that carry out tasks that a human has full control over to fully-autonomous bots that perform tasks without any external influences.

The voice-controlled pick and place robot has been designed and constructed. The device is fully functional and built from readily available components. It can be used as a self-assistant for picking the nearby objects.

VR robot placed in a remote location to capture the environment in visual form using Raspberry Pi. The capture visuals are displayed on the user’s virtual reality headset. The data is sent to the modem over Wi-Fi and to the RPi board, which provides these values as inputs to the servo motors.

The Raspberry Pi system used technology by interfacing with a camera that monitors the brightness to track the light. It is used for surveillance as the beginners can work with the Open CV technology by using the camera with Raspberry Pi.

Raspberry pi is used with python programming language where a simulation is implemented for the curved lane detection is done which will be apply to the video to detect the curve lane. It’s an effective way that can be used for self-driving and make the driving automation.

Digital art drawing through hand gestures and using a camera capture the digital art. Each finger is covered with different colors and gestures captured by the camera and displays the digital art using raspberry pi. It recognizes the hand, tracks movements, and provides information about hand position orientation and flux of the fingers.

It allows identifying objects in random positions and performing the pick and place operation using an industrial robotic arm. The solution is composed of a carrying woodblock of different dimensions, which arise randomly at the beginning of the conveyor and move to an area where it can be picked up by the robot.

The system Performs the work of the smart Receptionist in an automatic manner. Open CV Algorithm is used to extract the facial features of humans. It is recorded and identified whenever the Person visits the company. The System reduces human work and manpower.

The robots can perform prefer tasks in unstructured environments with or without human direction. Real-time object detection is required because safety and security are essential in remote monitoring and control systems.

The objective of the SLAM in robotics is to construct and update the map of an unexplored environment with help of the available sensors attach to a robot which will be used for exploring.

Brain-controlled robot device that measures electrical activity in the brain or spinal cord and transforms it into a synthetic output that can replace, restore or enhance natural function. The system can control a robot or other assistive devices using human thoughts.

It is to recognize the face of a person using a drone camera and load all information about the person sitting in the server room. It is useful for biometric attendance for military operations in remote areas and for surveillance purposes.

Leap Motion Controller is used for recognition of gestures, which are motions of the hand and as a result. It can control the motion of the drone by simple gestures from the human hand.

These solutions aim to mitigate the damage caused by the fires, using methods for early detection. It develops a new approach for fire detection and control, in which modern technologies are used. This allows using of computer vision methods for the recognition of forest fire detection, based on the images or video input from drone cameras.

Solar Panel tracking is used to improve the condition. The tracking mechanism moves and positions the solar array such that it is positioned for maximum power output. Other ways include identifying sources of losses and finding ways to mitigate them.

The sensors attach to the frame of the conveyor belt detect the type of waste material. The detected wastes are separate from the other wastes and collect in the trash barrel, which is placed beneath the conveyor belt. Thus, the wastes are segregated and collected in different barrels to make the process of segregation simple for the industries, and further, it can be recycled. The complete process is controlled by the Raspberry Pi.

20. A Sensor Glove for the Interaction with a Nursing-Care Assistive Robot

A sensor glove is employed for human-robot interaction in an assistive robotic system that is designed, produced, and evaluated. The sensor glove is based on flex sensors which are utilized to detect the user’s finger gestures and an inertial measurement unit which is used to detect arm movements of the user and other off-the-shelf electronic components.

Turtle Bot is designed to be easy to buy, build, and assemble, using off-the-shelf consumer products and parts that easily can be created from standard materials.

Automated processes in the field of agriculture have become more and more reliable and efficient. Agriculture wedding Robotic systems integrated with various control methods can be very useful in doing repetitive work. The arm is placed on a rover which is controlled Wirelessly using Bluetooth. The arm is taught to do the repetitive motion with a gesture using a hand glove to do the necessary work.

The robot will detect fire and move to the location and water will be pumped to extinguish the fire. It is used to control the robot from a web page and the camera will be used to send images of a particular location to know the status of that area. It will be helpful in order to reduce human power and also make the work totally automatic.