This project controlled the robot system in a new economical solution and as well as it is used for different sophisticated robot applications. The control system consists of a Touch screen and Bluetooth modules, a microcontroller that collects and controls the robot. Now Spying area on the military ground where the enemy stay can be taken before taking any action. The Mini Spy Robot is a small robot with a camera attached to it. The body of the robot consists of two wheels attached to geared motors. The motors will be run by the relays which will be then controlled through the Touch screen via the?BLUETOOTH? device. Just by using a Bluetooth-enabled Touch screen, the user can control the SPY ROBOT from anywhere area.?

A complete solution of robot control solution is presented in this project. This spy robot was fully controlled by the TOUCH SCREEN and the commands from the TOUCH SCREEN via Bluetooth transmitter were received by the microcontroller. So this spy robot can be used in military applications. Most military organization now takes the help of robots to carry out many risky jobs that cannot be done by the soldier. These spy robots used in the military are usually employed with integrated systems including grippers and cameras, video screens, and sensors. The military robots also have different shapes according to the purposes of each robot. Here this system is proposed with the help of a low-power Bluetooth wireless sensor network to trace out the intruders and the robot will take the necessary action automatically. Thus the proposed system, an Intelligent Robot using Bluetooth saves human life and reduces manual error on the defense side. This is a specially designed spy robotic system to save human life and protect the country from enemies. One of the most important things about these robots is that they have the capability to perform missions remotely in the field, without any actual danger to human lives.?

In the existing system, the robot has to control remotely where the person has to monitor the area using remote but manually controlling, and more Human more is required to implement this system.

This project design can be divided into two sections; hardware and software implementations. The hardware implementation consists of the development of the Touch screen sensor, Bluetooth and LCD and also uses an intelligent robot while the software implementation focuses on programing of raspberry pi using python program. The camera is used for detecting the enemy’s presence in battle or border areas by recognizing humans through deep learning algorithms. This way robot is able to classify objects in a frame into humans, animals, and inanimate objects and make decisions on their own. 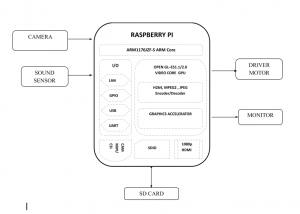 According to this system, whole area surveillance is done using the night vision camera and also an automatic system when the sound is detected robot will follow the particular path and go to that area and capture the area and send using IoT. This system is an automatic smart way for night vision patrolling.?

[1] ?Review of human detection techniques in a night vision? in 2017 International Conference on Wireless Communications, Signal Processing and Networking (WiSPNET)