In this digital age with the help of our cognitive abilities, we can see, hear and sense various new technologies and can communicate with them but this is not the case for visually impaired people in order for them to communicate with the world they need assistive technology and adaptive devices. The key idea of the project involves helping sight-challenged people. The proposal of the project involves capturing an image with the help of a camera, recognizing it, and extracting the content in the image using various data algorithmic techniques. With the help of this model people with blindness can be more independent with confidence. The major step in making this project a reality is to obtain images from the real world and recognize them with little to no latency and convert them into audio files that can be played. This can be executed out with the help of open cv and raspberry pi the main usage of the latter is its portability and compatibility which can be achieved with the use of battery backup functionality which can also be used for forthcoming endeavors. The size of the raspberry pi soc permits the customer to hoist it all over and wield it. Text and Label Reading?

Visually challenged of us have to handle a barrage of challenges to make sense of visual content with matching labels by using the systems available at their disposal now, merging concerns along midway, settlement, correctness, adaptability, and vivacity. Onboard a shrewd structure that aids the sight challenges which adequately and flourishingly inspect through lithographed content. The overall aim of the plan in action involves a camcorder positioned utilitarian accessory which is effectively used by singleton to look through lithographed article pieces. The point is to execute a picture-catching strategy in an introduced system in perspective on the raspberry pi board. The arrangement is encouraged by uniting with sight-impaired people, which enables an increasingly accommodating movement with the little framework. The camera present in this system is used as the input component to capture the picture for digitization. The optical character recognition algorithm (OCR) is used to scan and recognize the images.

A screen per user is a pc application that engages a sight hindered pc customer to perceive what’s on the screen through talk. But the main drawback is that it can quintessentially scrutinize the content or text or a message on a screen but not the whole depiction of an image. Everything considered, as of now there is not an absolute approach for the structure to describe a drawing figure is conceivable to detect a portion on an image. With the employment of the above procedure, the device examines by taking advantage of the shock passkeys along with the above-mentioned apparatus which can unravel the main achievement of the gadget through the verse appearing on the screen. All this can be achieved by a tiny procedure of pressing an enter? which is a vital step in order for the customer to interact with the above-voiced interface with a peculiar art of alphanumeric symbols. Also if the customer when asserting every set of alphanumeric symbols came to know that his confirmation of the depicted pattern was erroneous it would have a pulverizing effect on him and he would ultimately eradicate his entire work for the proper execution of the apparatus. But we know that being a customer is just a single instance of the points of interest that a deprived of sight PC habits? gets from a screen per user. Here the deprived of sight people simply check out a screen peruser scrutinizing the substance appearing in front of a screen, so they don’t know for certain whether the given outcome of the apparatus is entirely accurate and authenticate so, in other words, the client who employs this apparatus doesn’t know the exact logograph of a peculiar notably when the discussion is not ordinary identical to the restorative conditions.

So as to prevail with regards to managing the issues in the current framework we have built up a venture for visually impaired people utilizing OCR in open cv. The proposed framework is to help dazzle people to peruse content from testing examples and foundation to read the report. The principal focus of our framework is to dissect the content in the archives. Right off the bat, the item picture is caught by utilizing a camera module which is implanted inside raspberry pi and is trailed by the picture preparation. To deal with a mechanized framework, which looks at an archive and pursues its texture to the person on a snap of a catch. The lyric is conveyed with the aid of a mouthpiece which would push the person to read out the substance in the sweep archive. Our framework causes visually impaired individuals to read without expanding on multiple parameters which can be used in the process. The proposed framework is expected to address the issues featured in the issue proclamation. This new framework will contain raspberry pi alongside a camera module and headphones or some other speaker framework as its yield while its camera will fill in as its info. This is blended with programming that with the assistance of tesseract ocr will most likely proselyte any picture that is being pointed to an ongoing comprehend the content that is available in the picture and converts that content which it finds into sound. Furthermore, this sound will be given to the client by the utilization of headphones that the client will have and hence help individuals. 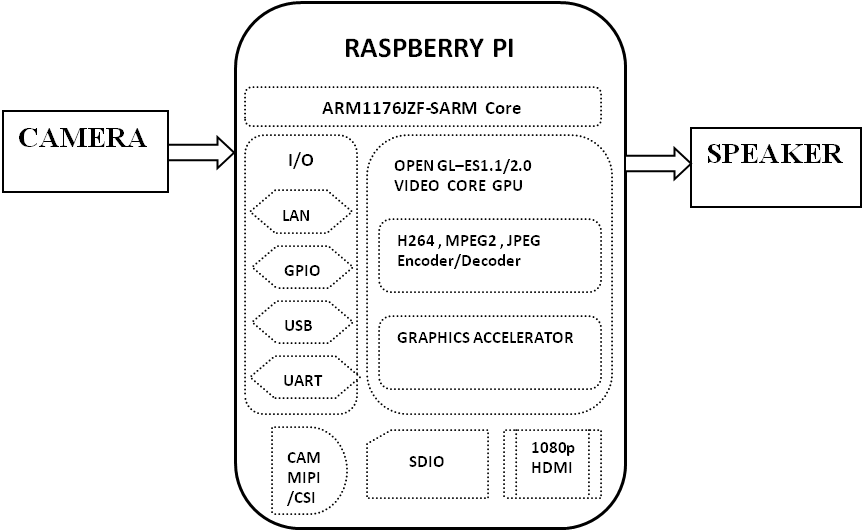 The camera here captures the text using OpenCV. The captured image is processed by the OCR software installed in raspberry pi. The captured image is converted to text by the software. The text is converted into speech by the tts engine. The final output is given to the audio amplifier from which it is connected to the speaker. Speaker can also be replaced by a headphone for convenience