In normal speed control of induction motor has been easier by using of microcontroller and semiconductor devices. This project is used to vary the pulse width modulation (PWM) signals by using an Arduino controller. The firing pulses of IGBT’s are varied. the firing pulse is given to the driver board and controls the pulses. Speed control of a single-phase induction motor is implemented using an Arduino Uno controller. Arduino Uno controller is connected to the PWM inverter. The single-phase inverter using Arduino output will be compared

Induction Motors are widely used in many industrial applications due to their simple construction and low maintenance cost. However IM motors are difficult to control over their speed characteristics as it is directly dependent on the frequency of the supply, it can be done using a voltage control system but however, is not very convenient and finely controllable. The system designed in the project developed a voltage/frequency drive system that controls the speed of the motor by varying the speed of the ac supply. To control the speed of a single-phase induction motor we generally use the V/F control strategy. The different methods available for the speed control of induction are pole changing, frequency variation, variable rotor resistance, variable stator voltage, constant V/f control, slip recovery method, etc., the constant V/f speed control method is the majority used. In this method, the V/f ratio is kept constant which in turn maintains the magnetizing flux constant so that the maximum torque remains the same. In constant V/f control with the PWM method, we can vary the supply voltage as well as the supply frequency such that the V/f ratio remains constant so that the flux remains constant too. So, we get different operating zone for various speeds and torques and also we get the different synchronous speeds with almost the same maximum torque. Thus the motor is used full and we have a good variety of speed control. It is effortless, cost-effective to easier to design in an open loop. But the drawback of open-loop is it doesn’t correct the change in output also it doesn’t reach the steady-state quickly.

Single Phase Inverter Using ArduinoThe AC drive system consists of a supply unit, rectification block, gate driver unit, inverter block, and load. The supply is given from 230V, IΦ. The step down transformer of (230V/12V) is used to step down the supply voltage to 12 V AC. The output of the transformer is given to the bridge rectifier which covers it into 12 V DC. 12 V dc voltage is passed through a voltage regulator circuit (IC7812) and thus constant 12 V dc voltage is fed as input to the H-bridge inverter.  An Arduino Uno is programmed to give PWM pulses to the H-bridge inverter. The pulses are varied using a potentiometer. So, for the constructed system the frequency ranges from 14.85Hz to 60Hz for variable voltage to change the speed of the induction motor. 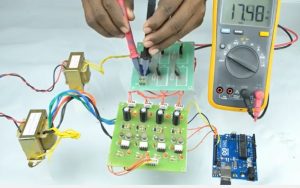 Thus the single-phase inverter using Arduino control is given an energy-efficient and environment-friendly solution. The Arduino pulse will be given to the H-bridge inverter, so the switching speed will be controlled by using pulse width modulation (PWM). The speed of the motor will be varied by varying the PWM signals.