This paper we propose a security patrolling robot that uses night vision camera for securing any premises. The robotic vehicle moves at particular intervals and is equipped with night vision camera and sound sensors. It uses a predefined line to follow its path while patrolling. It stops at particular points and moves to next points if sound is detected. The system uses IR based path following system for patrolling assigned area. It monitors each area to detect any intrusion using 360degree rotating HD camera. It has the ability to monitor sound in the premises. Any sound after company is closed and it starts moving towards the sound on its predefined path. It then scans the area using its camera to detect any human faces detected. It captures and starts transmitting the images of the situation immediately on sound or human face detection. Here we use IOT Local Area Network (LAN) for receiving transmitted images and displaying them to user with alert sounds. Thus we put forward a fully autonomous security robot that operates tirelessly and patrols large areas on its own to secure the facility.

The idea behind that is to protect the region as a whole. Any small sound resulting in sending the notification through the automatic robot to the person concerned consists of the night vision camera from which we can see the live video through the smartphone send and capture the area and send it to the user. Night vision camera plays a significant role in rendering the robotic device automatic. Robotics is a modern technology which is changing human life, as the key and emerging component of robotics is control and automation. Robots function as a computer, and can be controlled remotely. Patrolling is nothing more than keeping track of an area where the corresponding robot patrolling area is constantly moving and traveling is continuously moving in the area allocating to the robot. The robot takes the pictures at 360 degree rotation. Then, these images are sent to the user in real time, they will be evaluated by the user and action will be taken if any problems are found. Using camera motor we may gather knowledge from both sides of the external field. We can control the robot in two ways: one wired, and the other wireless. Wireless monitoring helps us operate robot from various locations. Any small sound resulting in the alarm and robot will automatically go to the area and capture the area’s image and send it to the user. In making an automated robotic device, Raspberry Pi connected to the camera plays an important role. The robotic vehicle travels at different intervals, and is fitted with camera and sound sensors for night vision. In patrolling it uses a predefined line to follow its direction. Once sound is rotating HD camera to detect any intrusion. It has the capability of tracking sound at the premises. Any sound after company is closed and its predefined direction starts to travel towards the sound. It then scans the region using its camera to detect any known human faces. It captures and starts to relay photographs of the situation immediately upon identification of sound or human face. Here we use IOT gecko to get transmitted images and view them with warning sounds to the user. So we’re putting forward a fully autonomous security robot that runs relentlessly and patrols wide areas alone to protect the building. Robot patrolling is primarily used in the military zone, hospitals, shopping mall, national functions, industrial field, etc.

In the existing system, robot has to control remotely where the person has to monitor the area using remote but manually controlling and the more Human more is required to implement this system.

In this system, authentication is required in the user side in order to view the streamed video and controlling the robot.

In this proposed system, Raspberry pi is installed with the night vision camera which help the system to go for the automation and help to find the human or any problem detected using the sound sensor and according to the sound produced it automatically goes to that area and capture the image and send it to user using IOT technology. 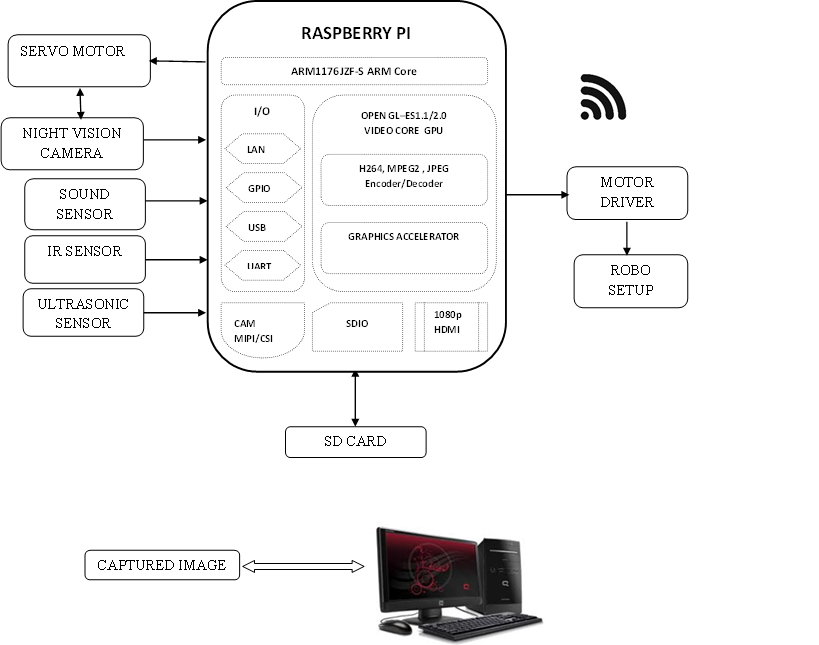 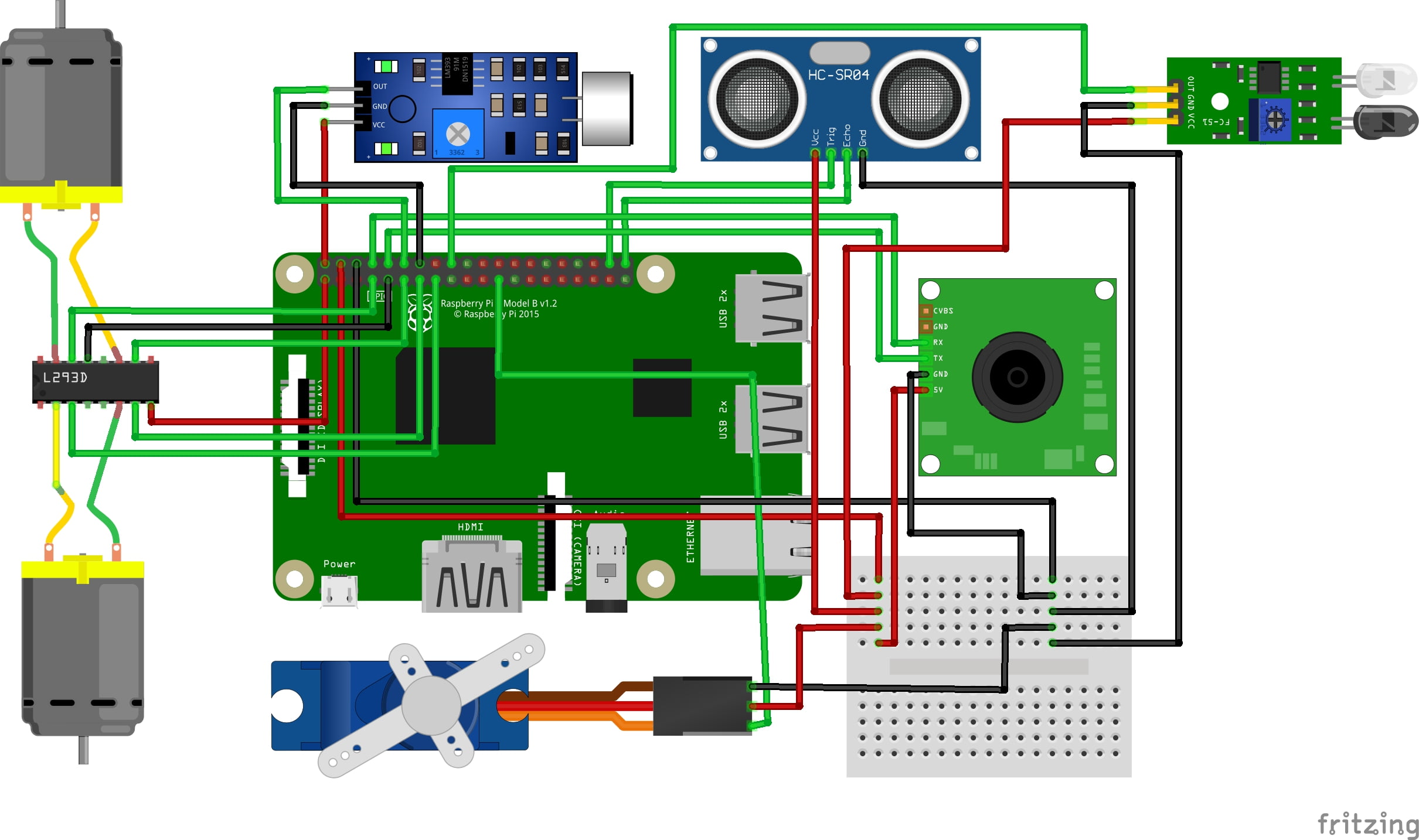 In this proposed device, Raspberry pi is equipped with the night vision camera that helps the user to go for automation and helps to find the person or any problem detected using the sound sensor and automatically goes to that area and captures the image and sends it to the user using IOT technology according to the sound generated. The robot has a range of knowledge to protect the greater region. This robot uses two infrared sensors that are capable of detecting obstacles robot on both hands. When the barrier does is at the front of the robot it changes its direction to the opposite side of it. In the robotic world, Microphone is used to detect sounds in the real time and send them to the monitoring system. The live photos and videos are recorded by the vision system. Two generators are enough to power the module for robot movement. Because the number of gears in the motor is small, less power consumption will be received. This robot will be moving front and backwards using infrared sensors with the help of wheels with the use of Dc motor.? Where the raspberry pi is used to connect to the Wi-Fi. After connecting to the Wi-Fi the captured pictured and will be visible in the operators mobile. Where the operator can turn the camera 360 degrees to check out the whole street. There is a sound sensor using in the robot. This sound sensor will sense the sound with the particular frequency and after sensing the sound the robot will move towards the sound recognized side and the camera will be switched on and the camera will record the video with the audio file. This video and the audio file will be monitored by the operator who is having with robot.