Classification of skin lesions plays a crucial role in diagnosing various, local and gene-related, medical conditions in the field of dermoscopy. Estimation of these biomarkers are used to provide some insight while detecting cancerous cells and classifying the lesion as either benign or malignant. This paper presents groundwork for detection of skin lesions with cancerous inclination by segmentation and subsequent application of Neural Network on dermoscopy images, Images with skin lesions were segmented based on individual channel intensity Thresholding. The resultant images were fed into NN for feature extraction. The extracted features were then used for classification by an NN classifier. Previously, several approaches have been used for subject diagnostic with varying degree of success. However, room is still available for exploring other techniques for improving proportion of successfully detected malignant lesions. 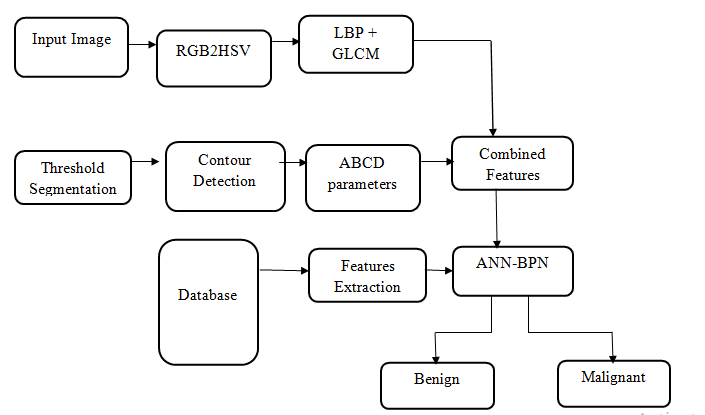 Color space conversion happens when a Color Management Module (CMM) translates color from one device’s space to another. Conversion may require approximations in order to preserve the image’s most important color qualities.

The ABCDE Rule of skin cancer is an easy-to-remember system for determining whether a mole or growth may be cancerous. They describe the physical condition and/or progression of any skin abnormality that would suggest the development of a malignancy.

As is clear from the diagram, the working of BPN is in two phases. One phase sends the signal from the input layer to the output layer, and the other phase back propagates the error from the output layer to the input layer. For training, BPN will use binary sigmoid activation function Back-propagation is the essence of neural net training. It is the method of fine-tuning the weights of a neural net based on the error rate obtained in the previous epoch (i.e., iteration). Proper tuning of the weights allows you to reduce error rates and to make the model reliable by increasing its generalization

[7] M. Moncrieff, S. Cotton, P. Hall, R. Schiffner, U. Lipski, and E. Claridge, Siascopy assists in the diagnosis of melanoma by utilizing computer vision techniques to visualize the internal structure of the skin,2001.