The Internet of Things (IoT), as an expected infrastructure for the envisioned concept of a Smart City, brings new possibilities for the city manager. IoT vision introduces promising and economical solutions for massive data collection and its analysis which can be applied in many domains and so make them operate more efficiently. The smart city concept represents a compelling platform for IT-enabled service innovation. It offers a view of the city where service providers use information technologies to engage with citizens to create more effective urban organizations and systems that can improve the quality of life. The emerging Internet of Things (IoT) model is foundational to the development of smart cities. The integrated cloud-oriented architecture of networks, software, sensors, human interfaces, and data analytics are essential for value creation. IoT smart-connected products and the services they provide will become essential for the future development of smart cities. This paper will explore the smart city concept and propose a strategy development model for the implementation of IoT systems in a smart city context. IoT-based Smart City Management using Raspberry Pi

The Smart City represents a hot topic nowadays in terms of improving living conditions. Considering mainly the situation in the European Union, the EU national governments and also private companies are investing every year a significant amount of their budgets in research, development, and implementation of the concept of Smart City. The Internet of Things (IoT) is currently considered as a basic communication infrastructure for smart cities, where machines communicate automatically with each other. The biggest advantage is the cooperation of many different communication technologies and devices within one functional system, where a big amount of information and data are shared and used in a secure and smart way.

In the existing system, garbage is collected by the corporation weekly once or for 2 days once. Though the garbage strikes and overflows the garbage bin and spreads over the roads and pollutes the environment which produces air pollution causes several diseases. Traffic systems are not managed in an intelligent way, the current system gives a pre-pre-defined system for traffic control. Does this lead to unwanted congestion.?

In this system, an IoT-based smart city is realized for integrating all needed services into a single system. This system consists of an environmental monitoring system with different gas monitoring sensors. Traffic control system for modulating signal delay time for controlling traffic congestion. Different waste dumpsters in the city are monitored using level sensors. 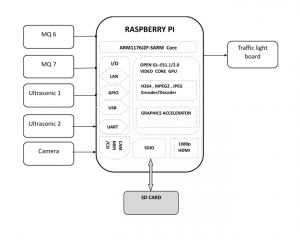 How can i help you?
<div class="pswp__preloa