With every enhancement on the Internet in terms of speed and bandwidth, IoT (Internet Of things) is taking the market on a new node and knocking on the door with new opportunities for inventions. This paper talks about an energy-saving electrical device Surveillance and Control system based on IoT. A large amount of energy is consumed by lighting appliances, so making improved efficiency and quick fault detection is a significant challenge. In this work, two different model approaches are followed depending on the nature of the application. For small areas or confined premises IEEE 802.11, wireless technology is used where all the appliances are connected to a common Wi-Fi network. In the second model like the street lamp pole where a number of appliances grow only in one direction, the wired configuration is used to avoid range issues.

IoT is a system of related sensors, computing, and digital devices spread across the globe over the internet which can communicate amongst them to share and transfer information using a unique id which is assigned to each and every device, as UIDs (Unique Identifiers). With the growth of different commercial premises and societies, the focus to automate these premises has increased drastically. Also, the growing traffic mess in the cities has pushed everyone towards a better and more reliable electrical control system. A user-friendly web application and mobile-based surveillance & control system connected to an IoT cloud server is used here for more energy conservation and early resolution in case of any fault detection. In this new growing era where smart cities are taking into shape, the effort for optimal energy-based traffic signal and light control systems has gained pace. So the effort has been taken to provide a reliable and user-friendly application for easy to use and monitor electrical devices. 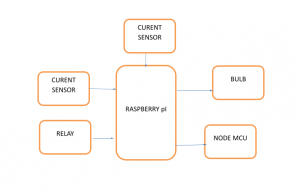 It consists of street lamps(BULB), sensors to detect the flow of current, a relay to control the on/off of the device, and a 5 v power supply converter and node MCU at the slave end (electrical device). Sensors are used to control electrical appliances and send the analog signal of the environment to the system and perform the related task. The master end consists of a Raspberry Pi 3 controller connected to an Internet connection. The purpose of the microcontroller is to take the data from all the street lamps through Wi fi connection and convert them into serial communication. The signal is transferred through the sensors to NodeMCU which in turn transmits the signal wirelessly to the master control terminal. The master controller detects the signal and performs an appropriate task in case there is a detection of failure of street lamps. The transmission system comprises NodeMCU at the electrical device end which receives information through sensors attached to the device. At the other end, the master controller (Raspberry Pi) receives information wirelessly and sends the data to a central monitoring system. Web application presents the graphical representation of the received data from the electrical devices.

Many systems have been developed based on technologies like GSM? and Zig bee. GSM modem which needs an active SIM to send/receive SMS through microcontroller. Here the street controller 89C51 is connected to the GSM modem through its UART port (Serial Ports). The Sim card used in the GSM module may be compromised with certain risks and also the cost of developing such a system is quite high. Security algorithm adopted in GSM (e.g. A3, A5) is not disclosed algorithms. The researchers have proved that these algorithms cannot prove 100% security. Lastly, every time, the GSM module sends a signal through SMS a minimum balance has to be maintained in each individual GSM module of the connected network. So there is an overhead maintenance cost included. Zig bee module is costlier in nature as compared to Node MCU which is very lesser compared.

NodeMCU Wi-Fi chips are quite lesser in cost than compared to other contemporary chips. This chip is manufactured by a Chinese company that has an inbuilt MCU and TCP/IP layer. The key focus area of this is cheap cost, lesser power consumption than other controllers, and reliable performance. There are various applications of NodeMCU like home automation, electronic product, and medical equipment. The proposed Surveillance and control system in this paper is divided into two categories 1) On-premise 2) directional.?

Though both the categories have the same purpose but differ in the system design. One directional focuses mainly on long-distance control like traffic signals which works on wired communication through its Master Controller (Raspberry Pi). This pi has several input/output pins which are connected to devices. Further pi is connected to a Cloud server to process the data and send information to end-users in mobile or web applications. On-premise uses NodeMCU module to communicate to Master controller over the HTTP protocol through the internet to detect the faulty devices in the system.

This IoT-based device surveillance and control system is exclusively used to keep surveillance on the electrical devices’ working condition and also to control the on/off functionality from a central remote location. The designed system works efficiently for both indoor and outdoor lighting. On the one hand, it improves the efficiency of the system by sending alert signals in case of any defect, and on the other hand, it drastically reduces the electric energy consumption by providing central control over the appliances. The graphical App-based mobile control gives a user-friendly and easily accessible platform to the user. This system can be installed as an energy-efficient system to control street lamp that requires a lot of energy and needs manual intervention.