Digital images are obtained from the retina and graded by trained professionals. The progression of glaucomatous retinopathy is assessed by its severity, which in turn determines the frequency of examinations. However, a significant shortage of professional observers has prompted computer-assisted monitoring. In Our Proposed method we implement pre-processing using noise removal or green plane process in Discrete Wavelet Transform, Curvelet Transform, Orthogonal Transform, and Fuzzy segmentation on a minimum of 10 features (Mean, Variance, Entropy?.) with our data set trained images on 50 images using NN (neural network) training and we applying NN classifier based Normal or Abnormal in accuracy comparison between Discrete Wavelet, Curvelet, and Orthogonal transform and fuzzy segmentation. When the blood vessels get damaged Glaucoma disorder is found.Glaucoma Detection using CNN and Matlab

Retinal vessel segmentation is the implementation of screening programs for glaucomatous retinopathy, evaluation of the retinopathy of prematurity, detection of macular avascular regions, detection of arteriolar narrowing, measurement of vessel tortuosity to characterize hypertensive retinopathy, measurement of vessel diameter to diagnose hypertension, cardiovascular diseases, and computer-assisted laser surgery. Other indirect applications include automatic generation of retinal maps for the treatment of age-related macular degeneration, extraction of characteristic points of the retinal vasculature for temporal or multimodal image registration, retinal image mosaic synthesis, identification of the optic disc position, and localization of the fovea. Furthermore, the network of retinal vessels is distinctive enough to each individual and can be used for biometric identification, although it has not yet been extensively explored. Vessels, fovea, and optical disks are the three most important structures of the human retina and are mostly used for several applications, such as retinal image registration, illumination correction, as well as pathology detection inside the retina. Detection of these important structures manually is time-consuming and depends on the expertise of the user. The segmentation of blood vessels from fundus photographs can be difficult for a number of reasons. Some of the corrupting sources are related to the acquisition process and kind of imagery, and others are intrinsic features of retinal images. Glaucoma Detection using CNN and Matlab

Retinal image analysis for glaucomatous retinopathy detection based on, 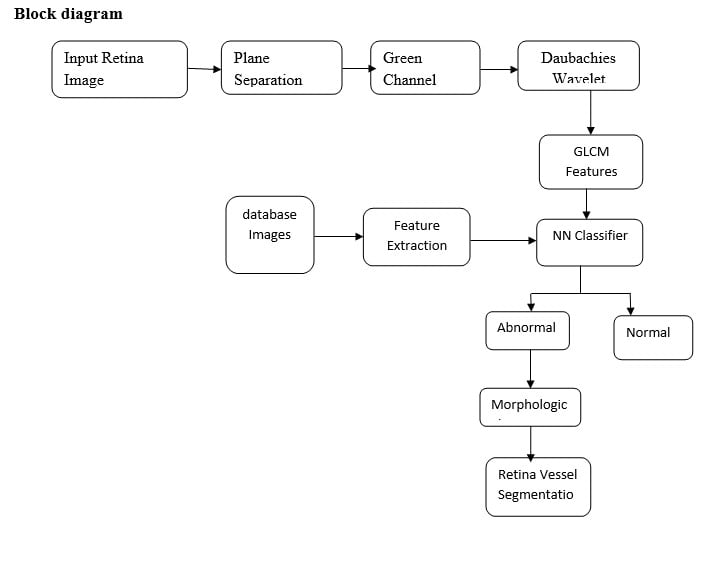 Extracting the Green Component from the RGB Image

Wavelet Transform is a type of signal representation that can give the frequency content of the signal at a particular instant of time or spatial location. Stationary wavelet transform decomposes the image into different subband images, It splits components into numerous frequency bands called subbands. They are? LL, LH, HL, and HH subbands. A high-frequency subband contains the edge information of the input image and an LL subband contains clear information about the image.? Upsampling of coefficients will be performed for factor 2 after each row and column decomposition process to make a lossless representation of edge detail

In statistical texture analysis, texture features are computed from the statistical distribution of observed combinations of intensities at specified positions relative to each other in the image. According to the number of intensity points (pixels) in each combination, statistics are classified into first-order, second-order, and higher-order statistics.

The Gray Level Cooccurrence Matrix (GLCM) method is a way of extracting second-order statistical texture features. The approach has been used in a number of applications, Third and higher-order textures consider the relationships among three or more pixels. These are theoretically possible but not commonly implemented due to calculation time and interpretation difficulty

A neural network consists of units (neurons), arranged in layers, which convert an input vector into some output.? Each unit takes an input, applies an (often nonlinear) function to it, and then passes the output on to the next layer.? Generally, the networks are defined to be feed-forward: a unit feeds its output to all the units on the next layer, but there is no feedback to the previous layer.? Weightings are applied to the signals passing from one unit to another, and it is these weightings that are tuned in the training phase to adapt a neural network to the particular problem at hand.? This is the learning phase.

Neural networks have found applications in a wide variety of problems.? These range from function representation to pattern recognition, which is what we will consider here.

Artificial neural networks (ANN) consider classification as one of the most dynamic research and application areas. The major disadvantage in using ANN is finding the most appropriate grouping of training, learning, and transfer functions for classifying the data sets with a growing number of features and classified sets. The different combinations of functions and their effect while using ANN as a classifier are studied and the correctness of these functions is analyzed for various kinds of datasets.

The real-world problems which are represented by multidimensional datasets are taken from a medical background. The classification and clustering of these data sets are significant. The data set is divided into a training set and a testing set and it has no usage in the training process. The results are produced with the help of these datasets and it is used for testing. The training set is taken from 2/3rd of the dataset and the remaining has been taken as a test set. This is made through the assessment of the accuracy achieved through testing against these data sets. Then the network is simulated with the same data.

The backpropagation algorithm trains the neural network. The gradient descent method (GDM) was used to decrease the mean squared error between the network output and the actual error rate. The following parameters are considered to measure the efficiency of the network,

A morphological operation on a binary image creates a new binary image in which the pixel has a non-zero value only if the test is successful at that location in the input image.

The structuring element is a small binary image, i.e. a small matrix of pixels, each with a value of zero or one: