In this paper, a closed-loop control scheme for DC-DC SEPIC converter that realizes regulated dc output voltages is discussed in detail. The converter equations corresponding to different modes of operation of the converter are developed. the controller using the loop shaping method is systematically developed. Simulations studies are carried out to confirm the effectiveness of the suggested control strategy under large perturbations.

In the previous system, the output voltage is not controlled. It is an open-loop DC-DC converter. It has a large number of voltage variations compared to the proposed system. There is no control block in the existing system. Losses of the system. Depends upon load controlled the voltage.

In the proposed topology, solves the all problems in the previous system. The proposed topology has a closed-loop function with the PI algorithm technique. This technique is used to control the output voltage. This proposed system gives a regulated output and increases output efficiency. 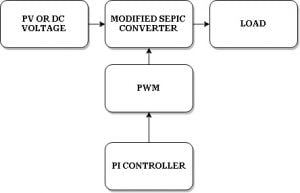 In the present paper, the modes of operation of the DC-DCSEPIC converter have been analyzed. The open-loop response obtained for the model is found to be oscillatory and also has a finite steady-state error. Hence, to obtain a satisfying response a proportional-integral controller is systematically developed whose specifications are attained by the loop shaping method. The controller gain values obtained so are used in the closed-loop control scheme of SEPIC. Simulation results highlight the effectiveness of the closed-loop control strategy.